That is the question that Tauranga City Councillors are looking at right now.

It’s a question that all the councils in New Zealand consider every 6 years as per the Waste Minimisation Act 2008. 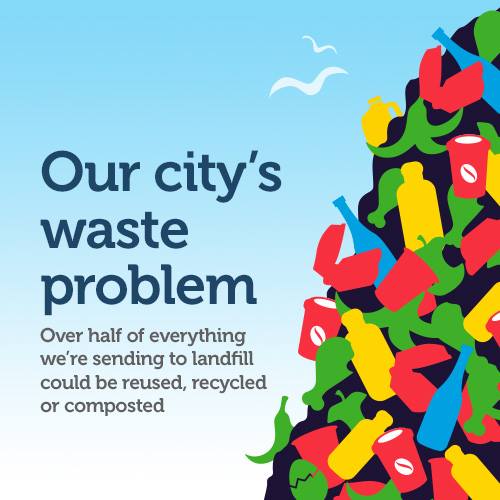 The current arrangement is:

The most interesting parts of this document were:

For me, the entire report comes down to these 3 numbers:

The report proposed 4 alternatives to the status quo (Page 96):

How Painful Is Paying?

Before we take a closer look at each Scenario let’s talk about the pain of paying.

If you have a friend with out-of-control spending, what’s the first thing you tell them to do?

Cut up their credit cards and pay cash for everything, right?

That’s because credit-card money is like Monopoly money, it’s fun to spend and it doesn’t feel like yours. But taking money that you just earned out of your pocket to pay your bills really hurts.

The same psychology is at play here.

It’s painful going to the supermarket and buying 6 months of council rubbish bags $60.  Or, it’s painful paying a contractor for a wheely bin.

What About Rate-Funded Rubbish Collection?

If rubbish collection became funded via rates, the pain would be moved into the activity of paying our rates (or rent). Very painful indeed, but it’s just a blob of cash that we have to pay to live here, and we find it hard to appreciate what it contributes to.

The purpose of this review is to send less rubbish going to landfill, so, in this situation, would be you incentivised to create less rubbish?

For me, I would lose the incentive to minimise my rubbish. Worse, I would likely fill the wheely bin allocated to me which would hold double the amount that my 1-bag-per-week holds.

I think that’s going in the wrong direction, so I don’t support Scenario 3 as it’s proposed.

As if paying for rubbish bags or wheely bin’s for rubbish wasn’t painful enough, if you want to recycle, you need to pay a contractor extra for a recycling wheely bin ($100 or $200 for 6 months).

Some of us take a calming breath and do it because we believe it’s the right thing to do for the environment, and others of us decide that $100-$200 can be better spent elsewhere, and we put that recyclable material in the general rubbish.

But if the costs of recycling was moved into our rates I think our behaviour would change.

Firstly, those of us who do not currently recycle, would have the ability to save money on their rubbish collection, by putting those recyclable items into the recycle bins instead.

Do you think that would make a dent in the 40-50,000 tonnes of recyclable material that we currently sent to landfill?

Secondly, because we are all forced to do it, there are significant efficiencies to be gained that drive down the price per person. For example, we would have 1 truck doing each street, rather than the current situation of all 5 brands doing every street.

For these reasons, I support Scenario 2 which introduces rates-funded recycling collection at the kerb.

What About Rate-Funded Organic Waste Collection?

In the report I was surprised to see such a large proportion of the waste sent to landfill as organic: 32%!

Scenario 3 proposes rates-funded organic waste collection, but that doesn’t sit well with me. I picture diesel belching trucks winding up and down our streets collecting compostable material, delivering it to a plant for processing, and then being sold in individual bags for fertiliser or being loaded onto trucks again to be delivered to it’s final location which might be onto orchards or farmland.

Instead, I’d like to see an education programme rolled out that shows people how easy (and beneficial) it is to compost their own organics.

With a simple compost bin, the organic material generated by a household melts down to a few spadefulls over a year.

In either case, I see organic waste as a resource. Just like we reclaim aluminium from the recycling because it is less expensive than mining aluminium from the ground, we can return organic materials to the earth at home into gardens, hedges, and trees.

Other Things To Think About

You may be aware that sustainability is one of my “campaign promises“.

Preparing this document for you has challenged some of the choices that my family makes, and I hope it’s done the same for you too.

I challenge you to think about:

Do you agree/disagree with my logic/reasoning?

Have your say in the comments below.