This is article #4 in my 16 part series summarising Tauranga City Council strategy documents.

This document was one of the biggest ones in this series: 135 pages.

I work in the city centre every day, so the city centre issues are in front of my eyes all the time. But I suspect that those of you that live and work in the self-contained suburbs of The Mount, Papamoa, Greerton and others, and rarely have cause to come to the CBD, care much less about the CBD.

But I think if we had a CBD to be proud of, all of us would share in that pride whether we made use of the area on a daily basis or not.

There are 5 sections on this document that interested me the most.

And some have had more progress than others. A couple have completely fallen over, some have been half completed, and a few have been completed. See if you can spot which ones are which:

The second section of interest to me is this list of features that citizens most often mentioned as being disliked:

From my point of view, I’d say these issues are the same today as they were in 2012.

The third section is this list of opportunities for future improvement most frequently suggested:

There are some great ideas in there!

The fourth section that caught my eye is this proposed map of open space. 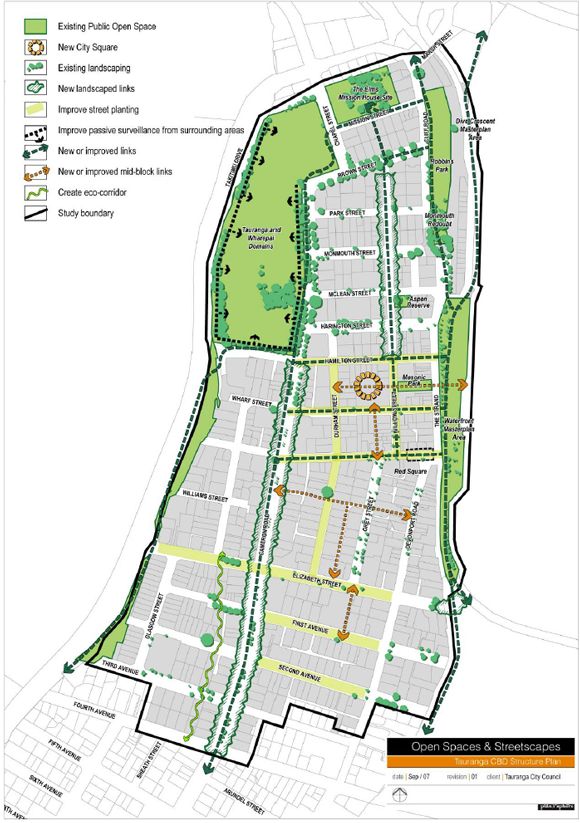 It has great ideas for how to improve the flow of pedestrians and adding open areas and lining the roads with greenery. There is no mention of cyclist though, which I would have liked to see.

The date stamp on this map is 2007 and here we are 9 years later and the only thing we have to show for it is more car traffic on the roads and increased demand for car parks, which has made the situation even harder for pedestrians (and cyclists).

The fifth and final section in this document of interest to me is about Car Parking.

Did you know that an street level car park costs about $10,000 to build, but one inside a car parking building costs about $40,000? Compare that with how much a parking meter might be fed in an entire year, or even 10!

I think that explains why the council is perceived to be very slow to erect new carparking buildings. The number one strategy is to utilise the existing carparks before building new ones.

The key question is “what is the capacity of on-street and off-street car parks at peak times”?

If the answer is less than 100% then there is a carpark out there for you, but you just don’t know where it is.

Technology could help here. Imagine a day when your car could reserve a car park for you and direct you there.

Until then, car parking will always be an issue downtown because you and I want to park outside our destination, and it drives us crazy when we know we can get free parking in the shopping centres in the suburbs but not in the city centre.

What do you think of my notes? Anything that catches your eye? Have your say in the comment section below.