I’ve got a little story to tell you about a doorbell, but first, a quick update from me.

You may know by now that when I made up my mind to become a Tauranga City Councillor, I set a goal of visiting 4000 homes before the election in October.

It’s important to me to do this because I’m learning so much about what’s on people’s minds, what their ideas are for the city, what their concerns and worries are. This is valuable knowledge for me, and above all it’s really fun meeting people and hearing their stories.

I’m proud to announce that on Wednesday night I finished visiting EVERY house in Matua: All 1873 of them. 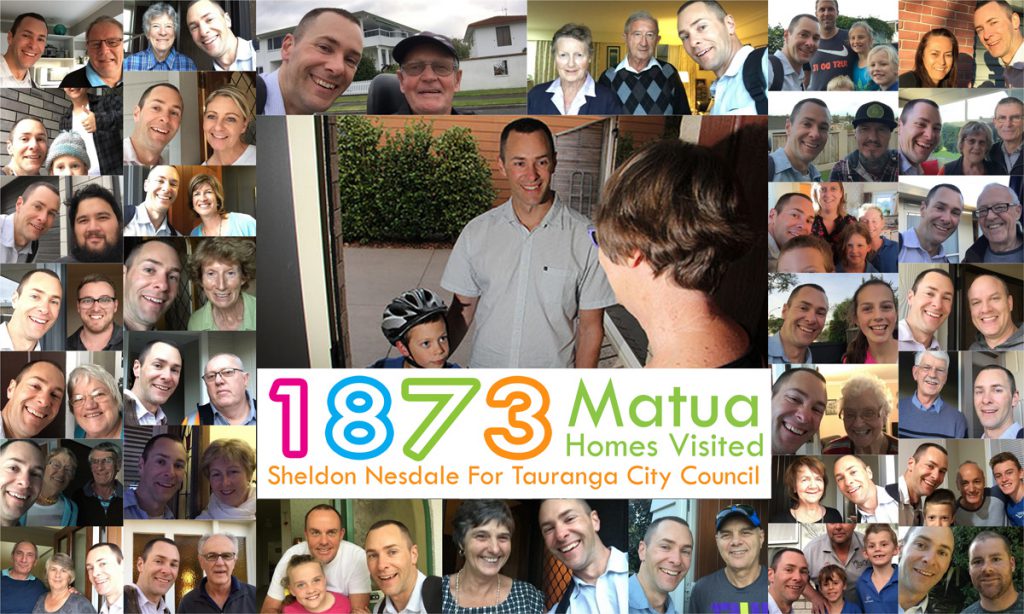 It’s taken me 45 hours to get around this many, I’ve walked, scootered and cycled 119.6km in Matua and most of that is driveways.

I’ve learnt so much, it’s been amazing, I thought that I’d would hear the same issues being raised again and again but I’ve been surprised that, instead, everyone has a slightly different perspective on things, their own view of the world, and their own ideas for improvement.

For example, one resident told me that sea lettuce is potentially toxic and needs to be removed quickly and carefully from our beaches, another told me it’s a resource and he has dried it and applied it to his vege garden with great results.

One resident told me he supports a grand museum that our city will be proud of for 50 years or more, another is worried about the debt burden but thinks children and tourists would enjoy it most, another thinks we can’t afford the construction at all so suggests we delay it another 10 or 20 years.

One resident wants to see shared walking/cycling ways connected together throughout the city, another wonders if more of us would ride buses if they were cheaper, more convenient and somehow more fun, another, somehow, wants other cars off the road so his own path is clear, another wants a tram down Cameron Road and the city centre, another wants a Monorail linking Tauranga to the Mount to Papamoa.

One told me that crime, domestic violence and homelessness is a huge problem here, another told me it’s wonderful that we don’t have those issues.

These visits have changed me. I used to react to issues and instantly form an opinion, but now I’ve realised that every issue can be a research project of it’s own that requires hours of reading and interviewing people to really understand it enough to generate a workable solution. I’m worried that later, people will think that I move slow but I hope they realise where my heart is, I just want to think things through carefully and make the right choices.

I’ve enjoyed my time on the streets enormously. Many times I’ve heard people say “I’ve lived here 20 / 30 / 40 years and you are the only candidate who has ever knocked on my door and asked me what I think. Thank you for visiting me'” That really warms my heart.

I’ll be starting in Pilans Point today and then Bureta, Otumoetai, Brookfield, Judea, Bethlehem and Pyes Pa. So if you live in those areas I might be knocking on your door next.

And now, the mystery of the midnight doorbell.